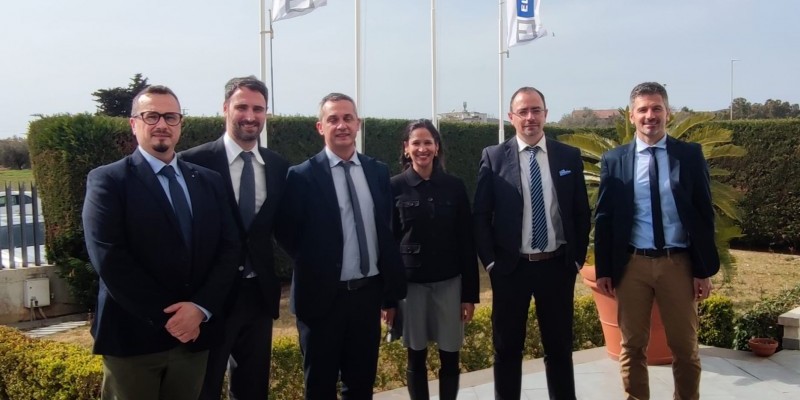 The company: «We encourage the exports and the internationalization of companies» Confindustria: «We work together in order to develop a network with the North American market»

The visit to Grosseto included also a stop at Elettromar spa. The Company settled in Follonica is specialized in industrial automation - 40 years in business, with 250 employees, a turnover of 31 million euros - has long had solid ties with the USA, where it has operational headquarters in Miami, Buffalo, Dansville (New York), Pittsburgh and Honolulu. Mr. Andrea Benini , the Mayor of Follonica took part in the meeting at the Elettromar headquarters in Follonica - with Andrea Fratoni (purchasing director), Simone Sanguinetti (operational director), Diego Gaggioli (commercial director) and Francesco Betti (sales manager).

Ms Gupta, since 2002 in the diplomatic service of the United States of America, in Florence since 2020 after assignments in Washington and Amman in Jordan declared «We are here, to learn more about a company that is already very active in the United States and that stands out for assisting companies that want to follow the same path. One of our priorities is to promoting the collaborations and the commercial exchanges, for many reasons: at this moment we must promote the recovery of the economy, already tested by the pandemic and now by the Russian invasion which is causing all kinds of relapses. More than ever today it is essential to work together».

Diego Gaggioli, the Elettromar commercial director confirmed «For many years our Company has had a close relationship with the Consulate, not only for working relationships in the United States but also because we strongly believe in the policy of promoting business development on the Italian territory and exports. We have gladly taken on the role of testimonial of the Americanization of Italian companies that have wanted to follow our example. We were also able to do it because in Follonica there is an industrial culture that starts from afar, from the historical Ilva steel industry».

«Follonica has a great manufacturing tradition and great potential - added Andrea Fratoni, the Purchasing manager of Elettromar and President of the Metalworking section of Confindustria Grosseto - and our Company is making full use of them. We have a culture of sharing and teaming up with the territory, with the entrepreneurial fabric and with the younger generations, as demonstrated by the initiatives we support: scholarships, the Academy. Unfortunately, at this moment the province of Grosseto has a GDP that could be assimilated to that of areas in complex crisis, but Elettromar is the demonstration that with commitment and trust in young people it is possible to recover: our company is in fact experiencing a phase of strong internationalization and in 2021 it recorded an increase in turnover between 30 and 40%. Numbers that gratify us and that encourage us to continue on this path».

Mr Francesco Pacini , the president of the Grosseto delegation of Confindustria Toscana Sud, talked: «The collaboration of our trade association with the consul Ms Gupta continues in a profitable way, just like with his predecessor - he recalled - who had had a guest at the Grosseto headquarters. In the province we can count on important peculiarities: for example, dynamic companies that know how to assert themselves nationally and internationally. Like Elettromar and Venator, the company where I work. It is essential to work together to develop relations with the North American market: a relationship that can undoubtedly bring benefits to both parties».

Today is a very important day for Elettromar and for all of us .

40 years ago on October 7th , the entrepreneurial adventure began which saw our Company grow and establish itself nationally and internationally, gaining the trust of our stakeholders.

It is a duty, as well as a pleasure, to share this anniversary with all of you who have been players in this path of growth. Without your passion and dedication we could not have reached this important milestone.

Our warm thanks go to all of you.

At the same time, we cannot fail to remember the colleagues who left us prematurely, but they continue to show us the way forward by example .

We consider this anniversary not a goal, but only a stage on the road still to be traveled together, full of new challenges and objectives to be grasped with renewed enthusiasm.